This post contains references to products from one or more of our advertisers. We may receive compensation when you click on those links at no cost to you. As an Amazon Associate I earn from qualifying purchases.

Royal Caribbean’s fleet contains some of the world’s largest and most innovative cruise ships.

When you choose your next cruise, you might be overwhelmed trying to decide which cruise ship is right for you.

Of course, ship size isn’t everything when picking a cruise ship. But, the size of the vessel is essential when considering the number of activities, entertainment, and dining options available to you.

Below is a list of all Royal Caribbean ships by size. We’ve arranged the list according to size measured in gross tonnage (the internal volume of a ship) and length measured in feet.

While older vessels are refurbished every three to five years, you’ll find a very different experience on a new ship compared to one over a decade old. Newer ships offer better technology, facilities, activities, and updated decor.

Whether you are looking for an exciting cruise on the newest ship, or a laid-back vacation on an older vessel, this list will help you choose the right ship for your cruise vacation.

The following table shows Royal Caribbean ships by age, from the newest ship to the oldest:

Royal Caribbean has several cruise ships on order, including a sixth Oasis-class ship Utopia of the Seas.

Utopia of the Seas will become the largest cruise ship in the world upon its debut in 2024. The vessel is expected to have a gross tonnage of 1,000 GT larger than the current record-holder, Wonder of the Seas.

Additionally, several ships on order are part of Royal Caribbean’s new Icon-class of cruise ships. The ships won’t be as large as the Oasis-class, but they will be around 200,000 GT.

Below, you’ll find a complete list of cruise ships on order by Royal Caribbean. These vessels are either under construction or have signed agreements to be constructed.

Royal Caribbean has eight classes of cruise ships. Each class of cruise ships features nearly identical designs and features, with some small differences between individual vessels.

The largest is the Oasis class of cruise ships. All five Oasis-class vessels make up the top five largest cruise ships in the world.

What is Royal Caribbean’s Largest Ship?

The vessel debuted in 2022 and holds the record as the largest cruise ship in the world.

What is Royal Caribbean’s Smallest Ship?

Royal Caribbean’s smallest cruise ship is Grandeur of the Seas.

Grandeur of the Seas is the oldest ship in Royal Caribbean’s fleet and the smallest in gross tonnage and length. The vessel measures 73,817 GT, 916 feet in length, and has a maximum occupancy of 2,440 guests.

What is the Newest Royal Caribbean Ship?

What is the Oldest Royal Caribbean Ship?

The longest cruise ship in Royal Caribbean’s fleet is Harmony of the Seas. The vessel is four inches longer than Wonder of the Seas at a length of 1,188.1 feet.

How Many Ships Does Royal Caribbean Have?

Royal Caribbean currently has 26 ships in its fleet. Ever since the introduction of Sovereign of the Seas in 1987, every subsequent ship has a name that ends with “of the Seas”.

However, many older Royal Caribbean cruise ships have undergone significant renovations thanks to the Royal Amplified program. Through the program, older Royal Caribbean vessels received substantial upgrades to bring their amenities closer to those of newer ships.
The program is more than the usual ship refurbishment. Each vessel in the program received upwards of $165 million in renovations to add new activities, entertainment, and dining options with an overhaul to the pool deck.

In our opinion, “Amplified” Royal Caribbean ships are on par with newer vessels, with the bonus of lower cruise fares.

What Was the First Royal Caribbean Ship? 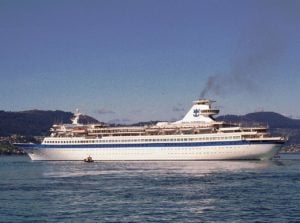 The Song of Norway was the first Royal Caribbean ship introduced in 1970. The original vessel could carry 724 passengers with an internal volume of 18,000 gross tons before being “stretched” in 1978, adding 85 feet and bringing her size to 23,000 GT.
The stretched vessel had a passenger capacity of 1024.

I’ve been cruising since I was 11 years old. I love the freedom that cruising provides, meeting new people, and exploring amazing new ships. I love to share my passion for cruising and travel with readers.

What to Pack in a Cruise Carry-on Bag (Packing List)

Serenade of the Seas Review – What We Loved (and Didn’t)

High Seas Cruising was founded by couple Marcello and Victoria to share travel tips and insights from over two decades of cruise vacations.